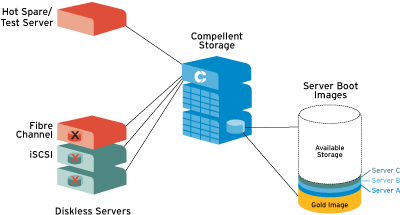 Dell Compellent Server Instant Replay is a complete Boot from SAN solution that leverages space-efficient snapshots to simplify physical and virtual server management. Using boot images stored on the Storage Center SAN, network storage administrators can deploy, provision or recover servers in minutes. There is no need for full-volume clones or server-based agents that may interfere with the process. The enterprise storage software is also ideal for testing application upgrades and patches without risk.

How to Simplify Server Management with Instant Replays

Booting servers from a centrally stored image on the SAN instead of local disks can reduce server costs, increase administrative efficiencies, and simplify overall server management. But traditional systems make implementation unnecessarily complex, or don't support server boot at all. Most storage systems require server agents that interfere with the boot process, limit the number of servers that can Boot from the SAN and consume excess capacity with full copies of boot images.

With Server Instant Replay, you can slash the cost of server hardware, management and on-site service contracts. Diskless servers reduce power and cooling and space-efficient boot images eliminate wasted capacity, helping you cut energy costs and storage costs. You can also save time-provision or recover a server in less than 15 minutes and map a boot volume in just a few clicks. Maintenance and recovery are also simplified-replace or add new servers with minimal downtime, boot servers faster from a centrally stored image and easily replicate boot images to speed recovery.

Centralizing server boot images on a Dell Compellent SAN eliminates the need and associated costs for internal disks, enabling businesses to implement low-cost diskless or blade servers. And the cost savings extend beyond lowering the initial hardware investment. Eliminating internal server disks can also drastically cut power and cooling expenses and decrease the space needed for equipment. It can even allow you to reduce on-site server maintenance from 4 hours to a less expensive next-business-day replacement. Additionally, managing a boot image separately from server hardware can reduce administrative costs. 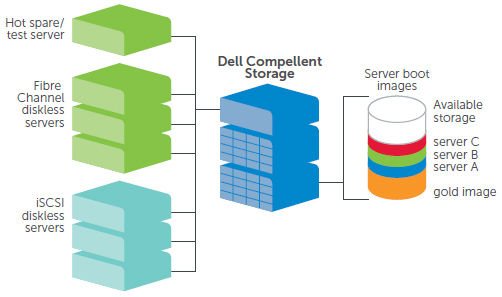 Dramatically reduce the cost of owning, operating and managing every server attached to your SAN

An intuitive wizard can significantly reduce the time and effort required to deploy and provision servers. Admins of all levels are guided through the process of capturing, storing, replicating and recovering boot images, and no training or costly consulting engagement are required to implement Server Instant Replay. Deploying hundreds of servers with Server Instant Replay can take far less time compared to local setup or traditional boot from SAN processes. What's more, streamlining server provisioning and recovery cuts overall server management time and can increase your productivity. You can provision a new server or recover a server image in less than 15 minutes and create boot volumes in just six clicks. Plus, the first LUN is automatically set to LUN 0 for seamless operating system integration, and all software is included with Storage Center and managed from a single, centralized console.

Server Instant Replay is fully integrated with space-efficient Dell Compellent Data Instant Replay snapshot technology to reduce the amount of overhead storage capacity required for every server that boots from the SAN. Each boot image is created by taking an intelligent Replay (snapshot) of the initial gold image, which includes pointers to the original volume rather than creating a copy of equal size. Admins can easily extend these SAN-based volumes for patches or OS updates. This allows you to cut overall storage capacity requirements; instead of consuming 30GB per boot image, Dell Compellent uses only 6GB. It also helps eliminate costly downtime by allowing you to create Replays on a schedule that meets your recovery objectives. In the event of OS corruption on the server, easily roll the OS back to a previous known point-in-time.

By booting test servers from a centralized image, you can easily implement a robust and affordable test environment. Server Instant Replay allows the flexible use of multiple operating systems on a single server. In combination with Data Instant Replay, you can test upgrades and patches on real data without risk. This allows you to increase test environment productivity and cut hardware costs for testing. Easily test a VMware virtualized machine in the morning and a Linux server upgrade in the afternoon, all with the same server hardware. Or if you have a server that is functioning in an unexpected manner, simply give it a new bootable copy, but keep the malfunctioning copy for forensic testing, all while keeping the production environment up and running. 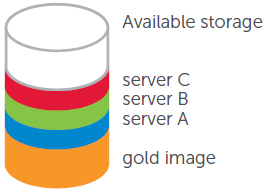 *Operating System and operating system administrative tools will determine how fast a replay can be mounted.