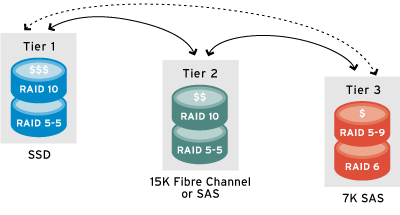 Based on actual use and performance requirements, Dell Compellent Data Progression automatically classifies and migrates data to the optimum tier and RAID level. All new data is written to Tier 1, RAID 10, for the highest write performance, yet snapshots automatically move to the lowest tier and most cost-effective RAID level within 24 hours. The most active blocks of data remain on high-performance SSD, Fibre Channel or SAS drives, while inactive blocks dynamically migrate to lower-cost, high-capacity NL-SAS drives. With Data Progression, organizations can dramatically reduce ongoing costs of storage.

Dell Compellent Fluid Data storage dynamically moves enterprise data to the optimal storage tier based on actual use. The most active blocks reside on high-performance SSD, Fibre Channel or SAS drives, while infrequently accessed data migrates to lower-cost, high-capacity SAS drives. The result is network storage that remains in tune with application needs, with overall storage costs cut by up to 80%.

How to Optimize Enterprise Storage with Data Progression

With the amount of data doubling every 18 months, more and more organizations are turning to automated sub-LUN tiering solutions. After all, analysts estimate that more than 70 percent of enterprise data becomes inactive within 60 days of creation. Yet most solutions fail to deliver on the potential benefits of Automated Tiered Storage. The functionality isn't truly integrated into the storage platform, but rather tacked on at the application level. There is no real-time awareness of how data is used, resulting in inaccurate data placement. Data is moved as large "all or nothing" pages. The tiering profiles are limited in scope, often requiring manual intervention. And licensing is restricted to a particular hardware platform, limiting scalability for future business growth.

The industry's only proven Automated Tiered Storage solution, Compellent Data Progression is not only fully automated and integrated into the storage layer, but also moves data based on policy-based profiles at a highly granular level using realtime intelligence. Data Progression automatically migrates data to the optimum storage tier and/or RAID level based on actual use and performance needs-without technology add-ons or manual intervention. You simply activate the feature and let it run, with the ability to customize the built-in algorithm if desired. The result is a self-tuning storage system that requires fewer high-performance disks, reduces power and cooling costs, and minimizes the data center footprint. With Data Progression, data is always in the right place at the right time for the right cost.

The Compellent Fluid Data architecture was engineered from the ground up to include Automated Tiered Storage. Data Progression is a fully integrated component of the virtualized storage platform, not a "bolt-on" technology or server-side agent. 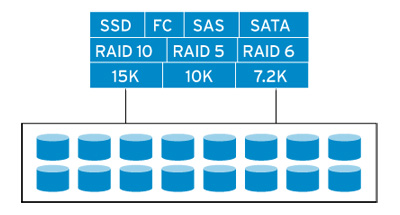 With a truly virtualized storage environment, data migration is not confi ned to conventional disk groups or even a pooled subset of the array. Data moves freely between tiers and drive types, as well as among multiple RAID levels within the same tier, for a constant balance of performance and cost. Only Data Progression brings automated tiering to the RAID level, providing unmatched precision and optimization in data placement.

Users can choose to leave the storage system virtualized as a single pool, or easily set up smaller pools to meet specific business objectives. Either way, no volumes need to be converted to take advantage of Automated Tiered Storage, and all storage is prediscovered so there's no delay when provisioning or expanding volumes. 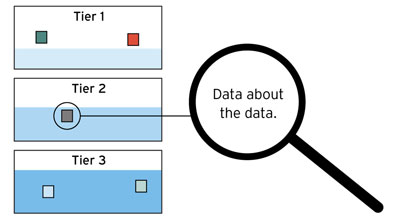 Real-time intelligence about how each block is used allows Data Progression to operate independently of manual intervention. Years of pragmatic sub-LUN tiering experience is built right into the solution. You simply activate the proven migration engine and let it run using a default profile. Or you can customize the tiering algorithm. The level of interaction is entirely up to you.

Policy-driven profiles provide hands-free management throughout the data lifecycle. Profiles can specify not only the storage tiers to be utilized by each volume, but also the various disk types, rotational speeds and RAID levels within each tier. Migration occurs online as a background process so applications never have to wait for data. And users can view all tiering statistics at a glance or schedule automatic email notifi cations. 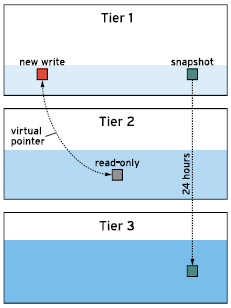 Data is written to Tier 1, yet snapshots move to the lowest tier within 24 hours.

Optimum data placement within each drive

Compellent Fast Track extends the power of data migration to the disk level, dynamically placing the most frequently accessed blocks on the outer tracks of each drive. The software uses the intelligence that is continuously collected in fl ight to identify these most active blocks on each spindle. 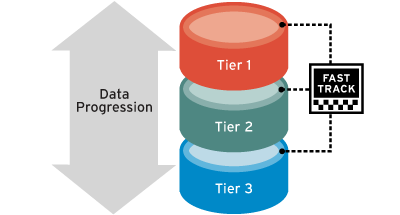 Fast Track groups the most active blocks on the outer tracks of each drive.

By placing newly written data in the best-performing region of the disks, Fast Track provides the lowest latency possible in any spinning disk configuration. Keeping the head focused on that one area of the disk, where the most active data resides, delivers better read/write performance than if the head were forced to seek over the entire disk.

Data Progression is not tied to any particular Storage Center model or platform, a common limitation with other sub-LUN tiering solutions that often leads to forklift upgrades. You can activate automated tiering on any new or existing Storage Center system at any time-and scale up and out without limits as business needs change. A software subscription provides perpetual licensing, so you only pay for additional licensing when adding more drives or new software features, even when upgrading to new controller technologies.

Since Data Progression is built right into the virtualized storage platform, no downtime is required to take advantage of the functionality. You don't need to waste time and effort converting legacy volumes for a new pooled configuration, or migrating existing data from disk groups to a subset of pooled disks. You simply turn on the feature and let it run. The system automatically begins classifying data based on previously captured use characteristics, then moves eligible data accordingly during the next migration cycle.